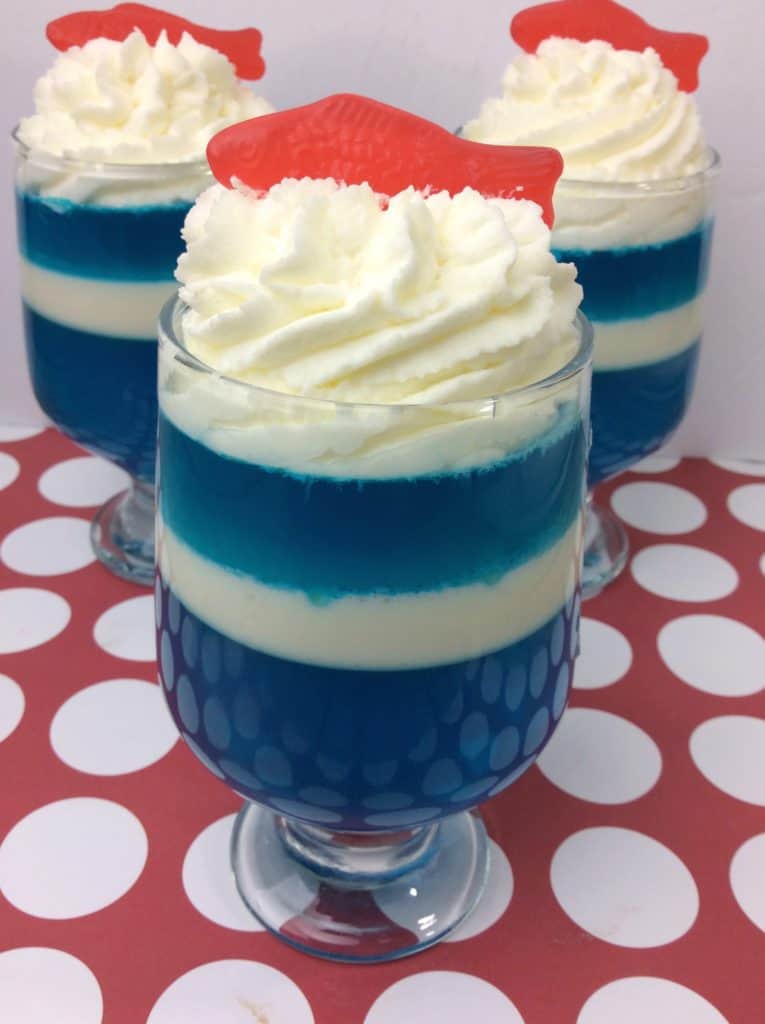 I may have been compensated for this post. Please keep in mind that it affects you in no way financially. If an item is being reviewed, I am not obligated to give a positive review and always use my own words. This disclosure is in accordance with the Federal Trade Commission’s 16 CFR, Part 255: Guides Concerning the Use of Endorsements and Testimonials in Advertising. If you would like a review done contact Dannelle at op40k@aol.com

My late mother-in-law actually knew the famous Theodore Geisel and had lunch with him a few times when she was a book buyer for a chain of bookstores. I was informed that he did NOT speak in rhymes. (snort) This Dr Seuss Red Fish Parfait is one of our recipes to celebrate his birthday and hope you have fun with it!

Directions:
In a mixing bowl, add the blue jello
Add in 1 cup boiling water and stir until dissolved.
Now add your cold water as directed on the jello box
Divide the among evenly among your cups.
I use a 1/4 cup to make sure my layers are even
Place the cups in the fridge to set.
Begin to prepare the creamy layer.
In a mixing bowl, combine the sweetened condensed milk and 1 cup of boiling water.
Stir to combine.
In a separate smaller bowl, combine the 1/2 cup cold water and 2 gelatin packets, stir to mix.
Allow the gelatin mixture bloom/set for 2-3 minutes.
Pour the gelatin mixture into the sweetened condensed milk mixture, stir to combine.
Once your jello is set, add in the creamy layer, making it as thick or thin as you’d like.
Once the cream layer is set, add the next jello layer.
Top each jello cup with a dollop of cool whip and a red fish candy