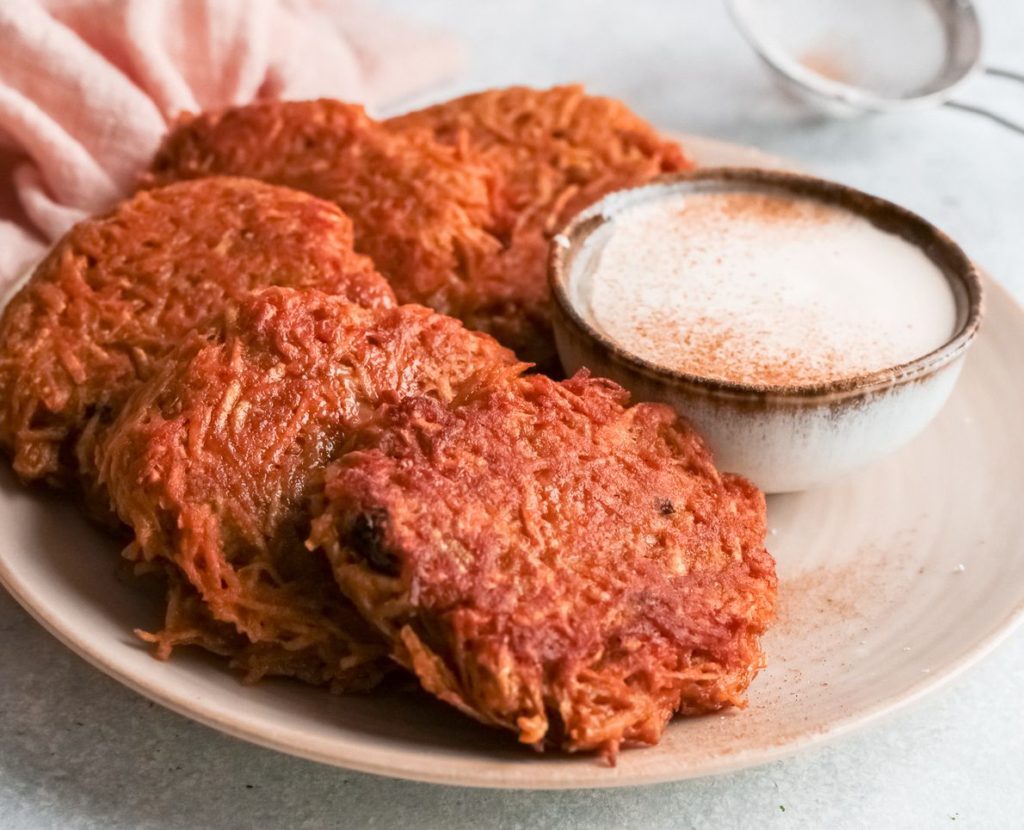 I may have been compensated for this post. Please keep in mind that it affects you in no way financially. If an item is being reviewed, I am not obligated to give a positive review and always use my own words. This disclosure is in accordance with the Federal Trade Commission’s 16 CFR, Part 255: Guides Concerning the Use of Endorsements and Testimonials in Advertising. If you would like a review done contact Dannelle at op40k@aol.com 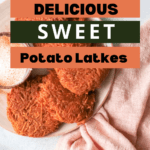 I know this seems a bit out of my wheelhouse as I’m not Jewish, but these Sweet Potatoes Latkes are so freaking yummy and thrifty!

When asking a dietician what the best veggie to eat was, she replied that if you could only eat one vegetable for the rest of your life, you should pick the sweet potato. I know I have covered this before- but it is high in fiber, full of amazing nutrients, and has a ton of different uses.

This Sweet Potatoes Latkes Recipe is a great recipe for switching things up a bit – they make for a fantastic side dish for anything from chicken to pork!

What’s the difference between potato pancakes and potato latkes?

It is easy to tell the difference – latkes are a more coarsely grounded potato – so you visibly see the “shreds” while potato pancakes have a more grated potato. That results in a rounder, smoother shape that is more consistent with what breakfast pancakes look like.

What nationality are latkes?

Jewish, which isn’t surprising as it is a Yiddish word. Traditionally prepared to celebrate Hanukkah, these gems come from the story of Judith, a fearless woman who is known as a Jewish heroine. They were originally cottage cheese fried cakes, but in the mid-1800’s they converted to potatoes. PBS did a nice article on it:

A series of crop failures in Poland and the Ukraine led to mass planting of potatoes, which were easy and cheap to grow. But before potatoes came on the scene, the latke of choice was cheese.

What nationality are potato pancakes?

They are generally Slovic: Russian, German, and Polish, and peasant food. When that crop failure even hit in the mid-1800s, potatoes were cheap, plentiful, and easy to store, making them a staple and necessitating inventive potato recipes.

Can you shred sweet potatoes ahead of time?

Absolutely! Cutting sweet potatoes in advance is a great way to meal-prep your way to an easier weeknight dinner. You can cut sweet potatoes a day or two in advance, but make sure to store them in cold water in the refrigerator. Otherwise, they’ll dry out pretty quickly after they’re cut.

Regular potatoes get that blue/grey tinge to them as their insides are exposed to the air after they are cut. Sweet potatoes? Same thing. Once that cut happens, the oxidation process begins turning them brown/grey.

Can I freeze grated sweet potato?

Yuppers! If you see it in the freezer section of the grocery store, you can do it at home. The trick here is flash-freezing.

What oil is best for latkes?

While you can use pretty much any oil in a pinch, Stick to canola or peanut oil, which both have high enough smoke points to fry up a mess of latkes. There is nothing worse than whipping up a batch of donuts or latkes and having to air out the smoke in your kitchen!

How thick should latkes be?

This really depends on if you are using them for an appetizer or as part of your main meal.

Appetizers are traditionally smaller – almost hand-holdable sized treats. While you wouldn’t hold these in your hand, you wouldn’t want to stuff yourself on the first course.

If it is part of the main meal? Bigger is better – think hamburger sized. These make for a great meal all in their own right – a few on a plate for breakfast? Yum!

What are latkes typically served with?

It might depend if you use these as an appetizer or a side dish. This a huge debate in our house. Some people like apple sauce on the side. That little hit of sweetness counters the salty seasoned potato patties well. The other camp goes for sour cream – after all, isn’t it perfect for a nice baked potato?

In a large bowl, combine sweet potatoes, eggs, brown sugar, flour, cloves, and cinnamon; mix well. Heat oil in a large heavy skillet to 375 degrees F (190 degrees C). Form mixture into pancake size cakes, and fry in hot oil. Flip cakes after 2 to 3 minutes (when the bottom is browned) and brown the other side. Drain on paper towels, and serve piping hot.

Here are some other potato recipes you may like: